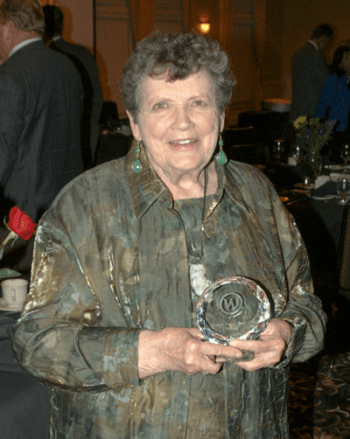 We are pleased to announce that Marya Hage, our organization’s founder, was inducted into the Minnesota Women Business Owners Hall of Fame in a ceremony held on Tuesday, April 19th.  She was recognized as a pioneer in our field of service.

The following statement was included in the event program:

After her father’s death when she was two years old, Marya Hage’s mother raised her as a single parent during the Great Depression of the 1930’s.  Though at this time, society primarily thought of “women’s work” as being in the home only, Marya’s mother pursued an education for herself to provide for the family.  It was her mother’s inspiration that has led Marya to become an impressive entrepreneur and community leader.

Hage started her business, Meridian Services, in 1980, when she noticed that there weren’t opportunities for individuals that needed assistance with living independently and successfully in the community.  At the time there were no organizations the provided such a service, giving her no models to follow.  Thus, Hage became a pioneer in new ways of looking at treatment options in physically and mental health, as well as now, models in treatment for addition.

As a volunteer Red Cross psychologist, she was called by the Pentagon in the days following 9/11, to provide mental health services to firefighters, police officers, search and rescue crews, construction workers and military personnel as well as members of ATF and FBI.

Hage believes that a truly successful organization is one that is successful both in its line of business and as an employer and contributor to the community.  She is also passionate in her commitment to education, particularly for women as the path to greater individual success, as well as the success of family and community.  She is deeply committed to access to education for all.  Marya Hage (husband Orval Hage is now deceased) has four children, eleven grandchildren and two great grandchildren.

Marya was one of a group of nine inductees. This group joins forty-five other women business owners previously inducted into the Minnesota Women Business Owners Hall of Fame in past years.

Marya was also quoted in the event program in a statement that clearly illustrates a core philosophy and principle upon which our organization has been built:

“In the final analysis, wealth and success matter little.  What does matter is that you made a positive difference in at least one person’s life.”